The dream of a serverless, general-purpose, portable application stack is finally a reality. TL;DR: deploy your application to GCP Cloud Run with a CockroachDB Serverless instance for persistence. Read on for a deeper dive.

AWS Lambda revolutionized the industry by introducing the concept of “serverless” computing to the masses. Today it lets devs and companies alike pay for exactly the amount of compute they need, down to the millisecond it takes to execute the code. A generous free tier lets independent developers experiment with and build small projects around it. But it’s not without its problems:

These, among others, make me hesitant to use Lambda for hobby projects or small business projects. Fortunately, the industry has been practically flooded with options since Lambda was first released, and nowadays there are solutions that revolve around containers as a packaging format, which removes most of the concerns. In this post, we’re going to examine one such solution: Google Cloud Platform Cloud Run.

Cloud run uses the container as the application packaging format, fixing most of the issues with AWS Lambda:

Cloud Run is built on Knative, a serverless deployment framework you can run on your own, or as a service, as in this case. As a lone dev mostly interested in building hobby projects, it is good to know that I can get off GCP if I want to, but I’m mostly interested in the PaaS offering to start with.

A serverless compute platform alone is not enough for our serverless application stack though. Long the issue with running serverless dev projects has been, where do we persist the data?

Serverless persistence has been the area with the biggest new product launches in recent years. Solutions such as AWS Aurora Serverless, PlanetScale and Cloudflare Workers Durable Objects have made serverless persistence readily available to devs, but they all include compromises that make them unsuitable for me:

If you’ve read any of my other posts, you’ll know that I’m a fan of PostgreSQL. Fortunately, a recent product launch ticks all the boxes for me: CockroachDB Serverless.

CockroachDB has long been the answer to the question; how do I run a relational database workload in a cloud native environment? Often this would not be the question you’re asking yourself if you’re a dev wanting to try out some new project, so CockroachDB was not that interesting. With their latest offering though, that all changes. It suddenly goes from irrelevant to the most promising solution of all:

That last point is very interesting, and sets it apart from the competition. You can ensure that you don’t end up with any surprise bills if you accidentally end up calling your database recursively. As a dev working on toy projects, this is very comforting and confidence inducing. Well done Cockroach Labs!

If you’re interested in learning more about how Cockroach Labs built their serverless offering, they wrote a very interesting blog post about it!

Now lets take this application stack for a spin!

To test this deployment stack, I’m going to run my grpc-postgres project on Cloud Run, connecting to a CockroachDB Serverless database cluster, and fire off some requests. Lets get started!

The Cockroach docs have a helpful quickstart doc. I signed in with my Github account and created a new “cluster” on GCP in Iowa (us-central1). As I plan on using Cloud Run, I figured it will probably work best if the database is deployed to the same cloud provider as the compute code. I was assigned the name merry-possum, which is cute, but not quite Tailscale tails and scales levels of dedication to the cause. Make sure to set the spending limit to $0 to avoid surprise fees!

The next step is to download the CA certificate used to establish the TLS connection with the database:

We’ll need to use this certificate when creating our container and make sure it’s available to our application when connecting to the database. We could theoretically run our application without verifying the certificate of the server we’re connecting to, but you almost certainly don’t want to do that, since it means you can’t be sure who you’re talking to! Using the certificate provided by Cockroach via their cluster web UI, we can be sure that we’re talking to the right database.

We also need to take careful note of the password. As this is the only thing that prevents other users from connecting to your database, make sure to keep it secret! Ideally it doesn’t need to be written down anywhere other than in the GCP secrets management. My application uses a URL to configure all the Postgres connection parameters, and the CockroachDB cluster web UI helpfully provides a connection URL. Since the URL contains your password, the whole thing should be considered a secret, and treated as such. Here’s what my string looks like (user and password redacted):

There are a few things to note about the connection string provided.

To learn more about the formatting of Postgres URLs, see their documentation.

Set up the GCP project

To isolate all the resources of my projects, I like to create a separate project each time. This time, I named my project serverless-application-stack, but you can of course name your project whatever you like.

Set up a billing alert on the project

GCP doesn’t make it nearly as easy to limit the amount of money spent unfortunately, so it’s a good idea to set up a billing alert. I have an alert set for when my spend approaches 50% of $1.

In order to deploy our application to Cloud Run, we need to publish the image to the GCP Container Registry or the newer GCP Artifact Registry. GCP nowadays recommends users use the artifact registry, so that’s what we’re going to use today. This limitation is probably the single most annoying part of using Cloud Run, as I’d much prefer to use my own registry, like the one provided by Github, or the official Docker registry.

Download and install the gcloud tool via your preferred installation method, if you don’t already have it.

Login to the gcloud CLI with gcloud auth login and authenticate your local docker CLI to push to your new repository. This is what it looks like for me, but it may differ depending on your location:

I already publish my application Docker images automatically using ko, so we will use that as a base for the new image. The only thing we need to add is the certificate we downloaded earlier, so that we can trust the connection to the database. Our Dockerfile looks like this:

Note that we put the CA certificate in /root.crt, to match the connection string change we made.

Ensuring we have downloaded our cert as ./root.crt, we can build and push the image in one command using docker buildx:

Now that we’ve got an image built, we can test running it locally, to make sure it works as we expect:

Note that for my application to work with CockroachDB, I’ve had to change the scheme to cockroachdb. This may not be necessary for your application.

As discussed, since the URL we’re using to connect to the serverless database contains our password, the whole thing should be considered a secret. Create a new secret via https://console.cloud.google.com/security/secret-manager/create?project=serverless-application-stack. Paste in the Postgres URL in the secret value entry.

I named my secret postgres-url.

Now that we’ve got our application image, our database, and our database URL secret set up, we can finally create the Cloud Run service: https://console.cloud.google.com/run/create?project=serverless-application-stack.

Select the application image we just uploaded when prompted. You may need to navigate to the Artifact Registry tab to find it.

I named my service grpc-postgres and deployed it to the Iowa (us-central1) region. This is the same region as my database is deployed, so it should minimize access latency.

I tuned down the maximum number of instances from 100 to 3, to prevent nasty bill surprises. We’re only playing around here, so no need for infinite scaling.

Under Advanced settings, I’ve reduce the memory capacity to 128MiB, since Go is generally pretty good at keeping memory use down, and we shouldn’t be buffering a lot of data.

Under Variables & Secrets, make sure to configure your service to use the postgres-url secret we created before. My application looks for the Postgres URL under the environment variable POSTGRES_URL, so I will mount the secret as an environment variable with that key name.

Under Connections, I tried enabling HTTP/2 connections for this service, since my application is both a HTTP and gRPC server, but it seemed to break my HTTP server, so I left it disabled in the end.

Next, we configure this service to Allow all traffic and Allow unauthenticated invocations. I want this service to be publicly available so that users can play around with it, but this may differ depending on your needs.

Proceed to create the service by following the wizard.

That’s it! Once the service has been created, you’ll be allocated a URL where your application can be accessed. 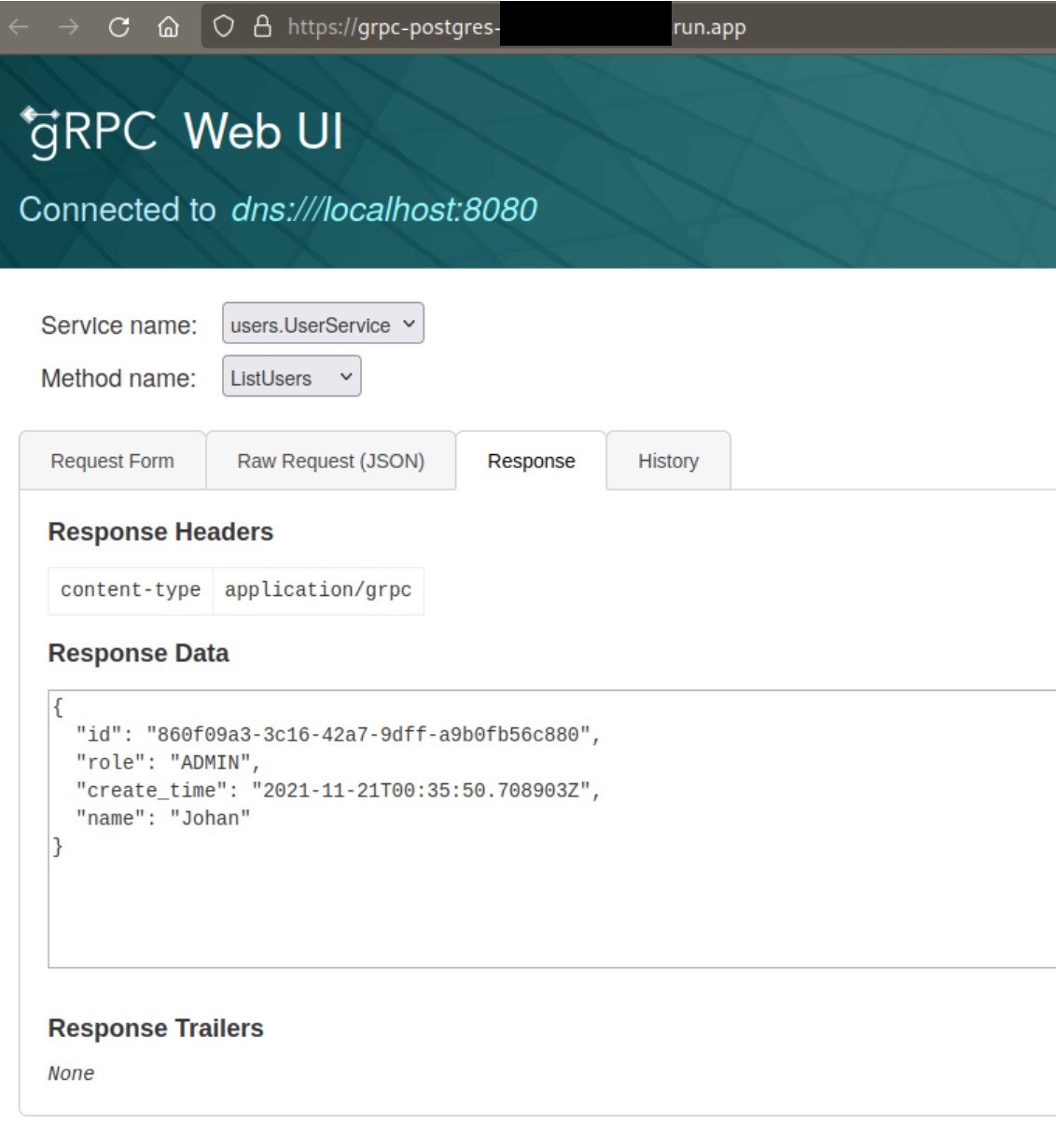 I also went and tested gRPC unary and server side streaming with my script and it seemed to work just fine, which is pretty cool!

We’ve introduced and deployed a scale-from-zero-to-infinity serverless general purpose application stack with persistence. I will probably be sure to use this method for any new experiments I want to try out and share with people.

If you enjoyed this blog post, have any questions or input, don’t hesitate to contact me on @johanbrandhorst or under jbrandhorst on the Gophers Slack. I’d love to hear your thoughts!