I was invited to a meetup

After my presentation at the Go London meetup I was approached on Gophers slack by a gentleman from Hungary called Máté Gulyás. Máté is one of the organisers of the Budapest Go Meetup, and was reaching out to me to ask if I would like to come down to Budapest and deliver a talk for the meetup. I was delighted with this invitation and promptly accepted and we started planning.

The meetup was eventually scheduled for the 6th of February and they arranged for me to fly down on the Monday and go back home again on the Wednesday. They mentioned that they’d arrange for us to do some things together on the day of the meetup, so I was really excited but didn’t know exactly what to expect.

After landing in Budapest, I was welcomed at the airport by Máté and Gergely Radics, another one of the organisers. They drove me into Budapest and I dropped my stuff off at the AirBnB they had booked for me. The room was in the central neighbourhood of Astoria.

After that, we went out for a little walk in the area as they were keen to show me around a little. We went down to the Danube and I snapped this beautiful selfie with Máté and Gergely (Máté in the middle and Gergely on the left). 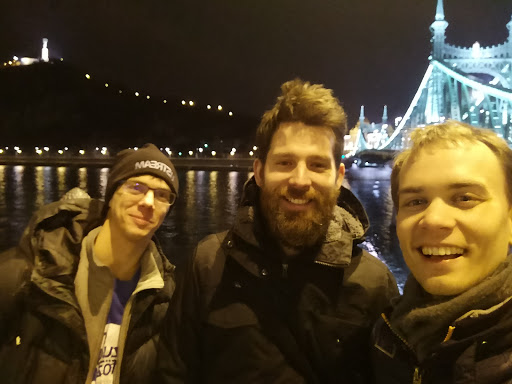 They had to leave so I went out looking for some place to eat and found a fast food restaurant called PadThai Wokbar which was a really nice surprise and I very much enjoyed my “Burma” sauce meal. 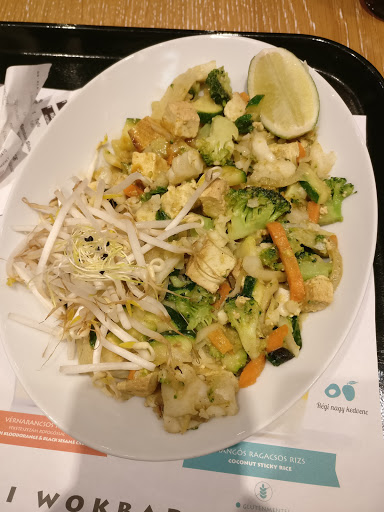 The next day I decided to get up early to make good use of the time I had before I was meeting the organisers again for lunch. I rented a MOL Bubi bike and had my eye on a few different landmarks, but I’m going to leave that for a separate post. Let it suffice to say that I didn’t expect to have to carry my bike. 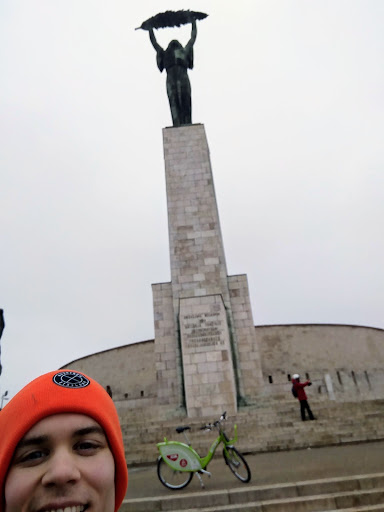 I met with Gergely and David Schneidhoffer, another one of the organisers, at the underground in Astoria, and we went together on the tram to a superb vegan junk food restaurant called Vegan Love. 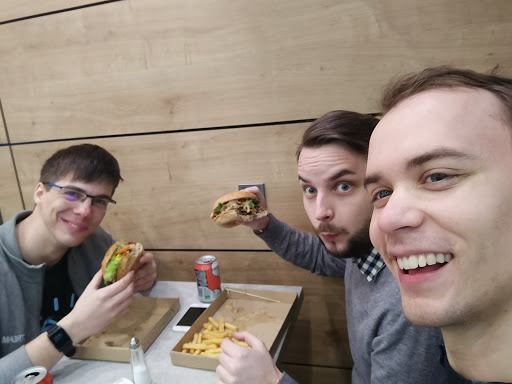 Gergely and David then took me to the Budapest Castle District, with stunning views over the city and some very interesting history on display. We walked around for about 30 minutes, taking in the sights and taking more selfies. 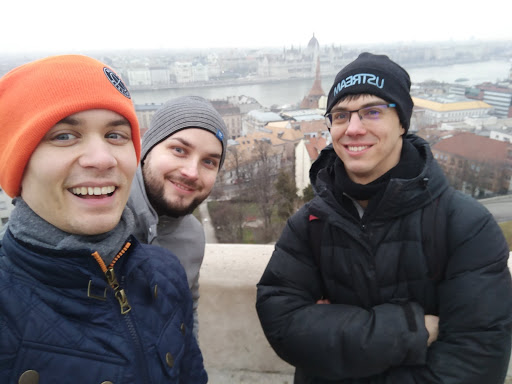 We left the Castle District and met with Máté again before heading to the IBM Budapest Lab (formely Ustream) where David and Gergely work. I discovered that they had a table tennis table on the top floor and promptly challenged Máté to a game. We had some good rallies, one of which was recorded by David. I refuse to accept Máté’s assertion that he won our game.

We later headed over to Heroes square, a beautiful area of the city with many interesting buildings and museums, including a castle built to illustrate different types of castle designs, and a thermal spa. 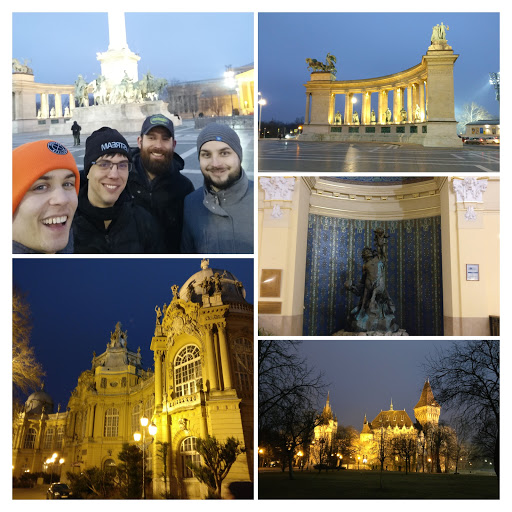 After the excursions it was time to head over to the meetup. I was already exhausted at this point but also excited to present my work. I delivered a 1h talk about my open source gRPC-Web for Go project. The feedback was really good and I was pleased the audience enjoyed the talk.

We then headed down to a nearby pub for some drinks and chatting, and of course to watch the SpaceX Falcon Heavy Launch. A good time was had by all and I headed back to the apartment, intoxicated with more than just the happy experiences of the day and the people I met. 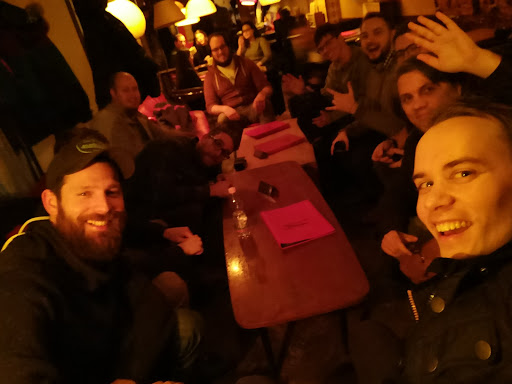 The next day I headed back to the Castle District to visit the much recommended Hospital in the Rock. I enjoyed the visit, but unfortunately no photos were allowed inside so I only have my own memories of the tour. There was a special exhibition about nuclear weapons at the end which I particularly enjoyed, and it included one of the paper cranes given by former US President Barack Obama to the Hiroshima Peace Memorial Museum during his visit in May 2016. On the way out of the museum it started snowing like crazy, which was a cool and slightly surreal experience as I’ve grown accustomed to the mild British climate where snow is very rare. 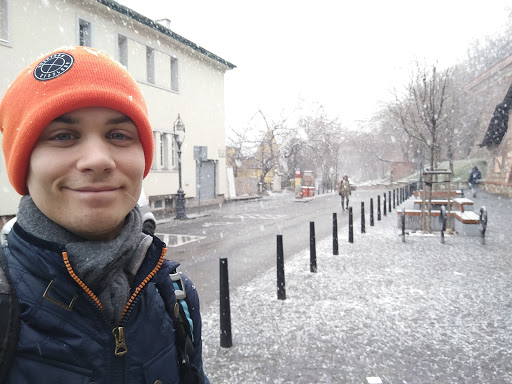 I later met up with David at Vegan Love again since I loved it so much the first time. I wasn’t disappointed the second time either, and it’s become one of my all time favourite restaurants. Definitely in itself a great reason to go back to Budapest.

We had some time to kill before I needed to go to the airport so David drove me up into the hills of Buda to show me a nice view of the city. Unfortunately, when we got there, we discovered that the visibility was, at best, limited. 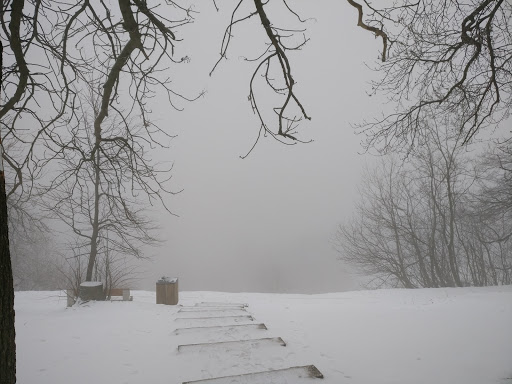 We did however run into a man who was taking advantage of the sudden snow by taking out his snowboard and kite for some snowboard-kiting (?). We helped him get off the ground and took some pictures and it looked really fun but also very difficult and complicated. 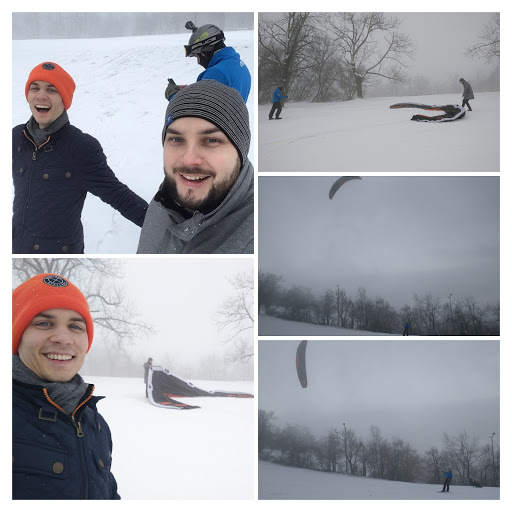 After that, we went to the airport and I had to say goodbye to David and Hungary, but what an amazing couple of days it was! I’m incredibly grateful to Máté, Gergely, David and Márk Sági-Kazár, the fourth organiser who was unfortunately ill during my visit, for my invitation and for their lovely reception. I had a great time and I look forward both to visiting Budapest again and to meet my new friends again, whichever comes first.